Central Hudson Gas & Electric will conduct a pilot test using a hydraulic dredging system as part of its ongoing environmental remediation project along the Poughkeepsie waterfront starting in late October and continuing through the end of the year. The pilot is designed to test the system in removing impacted sediments and materials from the riverbed at select locations using a hydraulic mechanism, dewatering the sediment, and transporting the materials on covered barges to a registered disposal facility.

“Central Hudson is committed to protecting the Hudson River as well our local residents and communities,” said Charles A. Freni, President and CEO of Central Hudson. “We believe this hydraulic dredging system offers a safe, efficient way of conducting this important environmental clean-up, and this pilot project allows us to fully test this method. I’d like to thank the State Department of Environmental Conservation (NYSDEC), the New York State Department of Health (NYSDOH) as well as all of our local officials and other stakeholders for their collaboration and determination to make this pilot program a reality.”

Similar to last year, these remediation activities require a temporary work exclusion zone within the River along a portion of the shoreline in the City of Poughkeepsie and adjacent area during this timeframe. The outer limit of this zone will be demarcated with a series of buoys and floating boom. In addition, lit marker buoys will also be placed along the floating boom alignment, so the limits are visible during nightfall and early morning.

In addition to the marked exclusion zone, several barges, cranes and other large equipment will be transported down river from the Albany area and will be visible on the waterfront for the duration of the pilot test.

If the hydraulic dredging technology is successful at safely removing sediments from selected impacted areas, Central Hudson will work with state agencies and stakeholders to initiate a full-scale remediation project in the fall of 2021. State regulations determine when in-river projects can be completed to best protect aquatic life in the area.

The cleanup project is related to a former manufactured gas plant (MGP) that once operated at this site to make gas from coal for light and heat for Poughkeepsie’s homes and businesses. The plant operated from 1911 until the 1950s, when it was replaced by natural gas.

In New York State alone, more than 300 MGPs were built and operated by local gas companies. Central Hudson is working under the approval of the NYSDEC, the NYSDOH and the United States Army Corps of Engineers to remove remaining by-products from the property and river sediments.

The utility is working with the community, stakeholders and regulators to ensure the pilot test and all subsequent remediation efforts are handled safely and responsibly. A description of the project and approved methods utilized to safely and effectively conduct these cleanup activities is available at https://www.cenhud.com/about-us/projects/poughkeepsie-shoreline-cleanup.

Equipment similar to those pictured below will be present in the Hudson River near the Poughkeepsie shoreline and beneath the Walkway Over the Hudson, conducting Central Hudson’s pilot test of a hydraulic dredging system as part of its cleanup project. 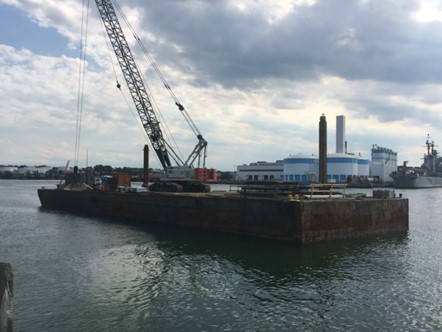 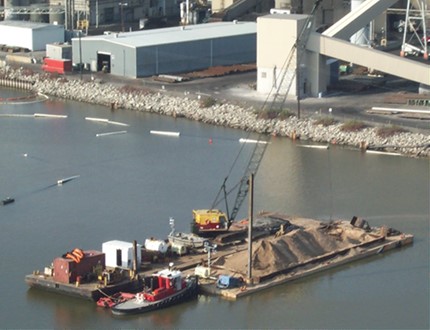